Scene from “Bernstein in a Bubble” by Alexei Ratmansky. Photo by Rosalie O’Connor.

Last night’s opening program for the American Ballet Theater at the Kennedy Center turned out to be bittersweet. Sweet because the ABT dancers looked fit, fierce and thrilled to dance live on the Opera stage. Bitter as Kevin McKenzie bowed out on this stage as artistic director of the company he has been running for 30 years. Ohats off to a party, it turned out to be!

…’Bernstein in a Bubble’ is a hoot and will chase those winter blahs faster than you can say, ‘Alexei Ratmansky.’

Kennedy Center President Deborah Rutter greeted the audience with a toast to McKenzie, who began her training at the Washington Ballet School, under the guidance of Mary Day. Later, he interpreted principal roles for the Washington Ballet (where this writer discovered his talent for the first time). Today, he is considered one of the greatest directors in the world.

“It is wonderful to see you back at the Opera for so many reasons,” President Rutter told the audience from the stage. “We are celebrating our 50th anniversary which began with Leonard Bernstein’s ‘Mass’ on September 8, 1971 and the next day the American Ballet Theater performed…and have done so almost every year since.” She eulogized McKenzie, pointing him to the orchestra seats. “Thank you for the beauty and strength of these glorious dancers,” Rutter acknowledged, then invited the audience to stand for the Ukrainian national anthem.

Moments later, the curtain rose on “Bernstein in a Bubble,” premiered for its digital premiere last year and danced by Skylar Brandt, Catherine Hurlin, Cassandra Trenary, Aran Bell, Patrick Frenette, Blaine Hoven and Tyler. Maloney. He kicked off the three-header program and will be repeated tonight with some cast changes. It was also my favorite of the evening.

From the first notes of the score “Divertimento” by Leonard Bernstein with mixed styles, between jazzy sounds and Latin rhythms, we immediately thought of his “West Side Story”. And like Justin Peck’s creative choreography for the 2022 film, Alexei Ratmansky, ABT’s first artist-in-residence, has a knack for creating characters that mirror the music, whether romantic, sensual or combative.

To be honest, I’m a huge Ratmansky fan. The dancer-turned-choreographer is known for updating old war horse ballets by adding his own quirky touches that defy explanation. His works are bold and colorful, like “Bright Stream”, first created in Russia, later for ABT. New York Times critic, Alastair Macaulay, called his choreography of “Romeo and Juliet” “the most gifted choreographer specializing in classical ballet”, encouraging this writer to travel recently to catch his rendition of “Swan Lake” for Miami City Ballet, yet another gem.

So, has this Russian-born master lived up to those hypes in this 2021 work? Indeed, “Bernstein in a Bubble” is a hoot and will chase away those winter blahs faster than you can say, “Alexei Ratmansky.” With costumes constructed by Marc Happen and digital fabric painting by Gene Mignola, “Bubble” is both colorful and whimsical with the seven dancers flying across the stage to delight us with fresh, honest charm. What continues to amaze us about his work is his unique and sophisticated freshness, which at its core combines a detached, sensual playfulness with a serious involvement in movement.

Conductor Charles Barker – his hair flying as fast as the dancers whirling on stage – added to the ballet’s frivolity with his handling of Bernstein’s brilliant score. I must point out the fabulous dancing of Zimmi Coker who never flinched when he was upset several times. 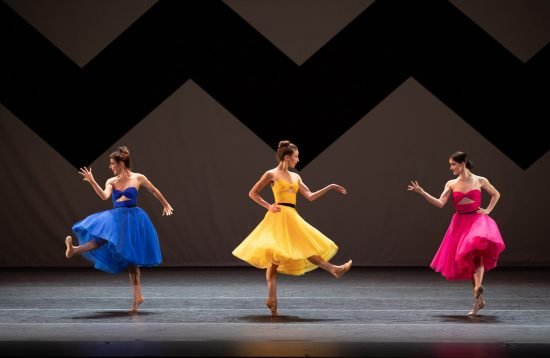 Closing Program A is another easy-to-watch modern ballet featuring hummed tunes by Tony Bennett with a special duet with Lady Gaga. With stunning costumes built by John Kristiansen New York Inc., Jessica Lang choreographed “ZigZag” as a centerpiece for solos, duets and small groups. It’s a free-wheeling, swaggering, fun cast that gives audiences a fresh take on what dance is all about. Before the curtain rises on ballerinas in stunning costumes spinning around and around, the theater is dark with only the voice of a young Tony Bennett crooning “What the World Needs Now”.

And it’s clear the world could use a little love, the only thing, Bennett sings, there’s just too little. Ah! We definitely need more love in our world…and our dances. Still, this 30-minute ballet seems turned towards the past and not towards the future which seems so promising for ABT. There is no message here. You just sit back, listen to the recorded songs and let your thoughts soar with the dance. On the other hand, one might recall the words of Martha Graham when she said, “If you can sing it, don’t bother dancing it.”

Its familiar tunes are brought to life by the company’s dancers – look out for Howard County’s Katherine “Katie” Williams in “Fascinating Rhythm” and the haunting “Smile.” Other highlights include Isabella Boylston who she dances with and Calvin Royal III, Catherine Hurling, Sung Woo Han and the full cast of “It Doesn’t Mean Anything If It Doesn’t Have That Swing.”

That leaves one of the most intriguing in-between offerings from Alonzo King, founder/artistic director/choreographer of his acclaimed LINES Ballet in San Francisco. Totally different from the opening and closing ballets, this work is witty in its message fierce in its presentation. Beautiful shimmering gold backdrops set the frame for the artwork which has dancers front and back to create a mysterious feel. Obviously, when you work with professional dancers, all classically trained, you have the advantage of presenting a work that the public will enjoy watching. Last night the crowd got up for the bows.

Congratulations to dancers Christine Shevchenko, Cory Stearns, Herman Cornejo – always one of my favorite ABT dancers, Devon Teuscher and Calvin Royal III for their wonderful presentation. Jason Moran, who is an artistic advisor at the Kennedy Center, performed the piano concerto of “Single Eye”, with the motto “If your eye is single, your whole body will be full of light”. – Matthew 6:22.” Egyptian-style costume design by Robert Rosenwasser deserves praise, as does Jim French for the lighting (without his touch, much would be lost).

I plan to revisit this intriguing work when ABT returns to its New York home in July. In the meantime, I can’t wait to see the Kennedy Center production of “Don Quixote,” an old work revisited by Kevin McKenzie and his team. Congratulations to all.

Duration: 2h20 with 2 intermissions of 15 minutes.

American Ballet Theater is performing now through Sunday, April 3, 2022 at the John F. Kennedy Center for the Performing Arts, 2700 F Street, NW Washington, DC 20566. Note that Katie Williams is performing in “Don Quixote” as Flower Girl, March 31, Mercedes and Queen of the Dryads, Saturday evening April 2, and a special role, Sunday April 3. For more information and tickets for ABT and the 2022 Dance Series, visit here. Proof of full COVID-19 vaccination and valid photo ID are required to attend all performances and indoor events at the Kennedy Center.

Arrive early and experience The REACH at the Kennedy Center as it stands COAL + ICE is a documentary photography exhibition that brings together the work of over 50 photographers and videographers from around the world to visualize the climate crisis – its causes and consequences – as a large-scale, immersive experience. COAL+ICE is co-curated by Magnum photographer Susan Meiselas and renowned exhibit designer Jeroen de Vries, and led by Orville Schell, Director Arthur Ross of the Center on US-China Relations at Asian society.