Earlier this spring, we were delighted to see the Jacob’s pillow Youtube video Inside the pillow lab, Dorrance Dance.

It was shot during their residency in November and December. Obviously, it was a joyous time for them, coming together again to create their ineffably virtuoso pillow tap dance, after medical procedures allowed them to work together without a mask, nearly a year after the start of the pandemic which has so disrupted the lives of performing artists.

The dancers spoke of their sense of order which collapsed during the pandemic and lost inspiration in isolation. They rediscovered the joy, rediscovering the sense of play and the emotional and physical vibrations between and among the dancers as they improvised and experimented with sound and movement.

Now emerging from the pandemic, Jacob’s Pillow offers a full schedule of performances on its Henry J. Leir outdoor stage, and this week, Dorrance dance, in their 11th season at The Pillow, ushered in the season.

Then it rained. And it rained. Our tickets for Wednesday night moved to Thursday, then Friday, and finally, Sunday afternoon July 4th, the clouds parted, and we were thrilled with Pillow’s inaugural performance from “Untitled Waveforms” and “Praise: The Inevitable Fruit of Reconnaissance.”

Perhaps we should start with a reflection on “Praise”, because if there is anything these rainy delays can teach us, it is that Nature reigns. What could be more fitting for what we hope will be the start of the end of a pandemic, than a reminder that our plans are always at the mercy of the forces of nature. Our praise must therefore encompass both respect for nature and gratitude for its benevolence.

As the socially distant audience filled their benches, after passing health checks, the company was already on stage, placed seemingly at random, practicing steps, gliding across the surface, splitting into small groups and spontaneously jamming, passing riffs, gestures and challenges among them. This pre-show conversation was like a glimpse into the heart of the tap, standing on the shoulders of children at street corners, soda pods squeezed into the soles of their shoes, churning out beats for sheer enjoyment, and for a few. – some of the coins were thrown into a traffic jam on the sidewalk.

If you have the chops, in this case your feet, you can go where your heart, body, and rhythmic impulse will take you, especially if you are among other tapping feet that will accompany you on the journey.

The first of the two pieces on the program, “Ways to Now”, developed by Nicholas Van Young, is an ensemble piece with magnificent contrasts: solos, layers of ensemble polyrhythms and moments of exquisite silence. It starts with the 10 dancers in a circle, hitting over single riffs in unison, building layers of percussive sounds into swaying counterpoint lines.

In synchrony and in opposition to their feet, the arms and torsos reflected and uplifted the increasing and decreasing levels of rhythmic and dynamic intensity. Joining the dancers, Donovan Dorrance’s sextet brought a new dimension of sound.

Invoking the experience of personal isolation – and the desire to connect – during the pandemic, and effectively using both the full width of the outdoor stage and the amplified tap floor, a line of nine dancers faced off against a tenth dancer. sad and lonely. The line moved from right to left of the stage, facing the audience and away, reabsorbing one lone figure as another stepped out of the line as she moved across the stage with soft, moderate strokes. in sound mediums. The effect has been a profound recognition of the year we have all lived. 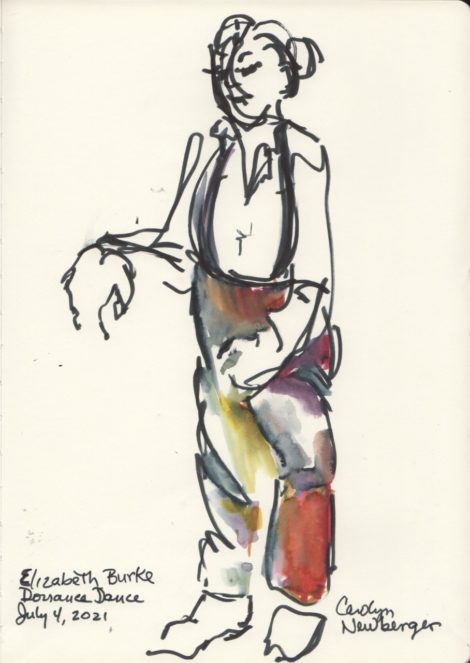 Over time, soloists and small groups have broken with the rigid line of their own expressions of individuality, showing their particular lyricism and expressive power, suggesting resilience and emergence. 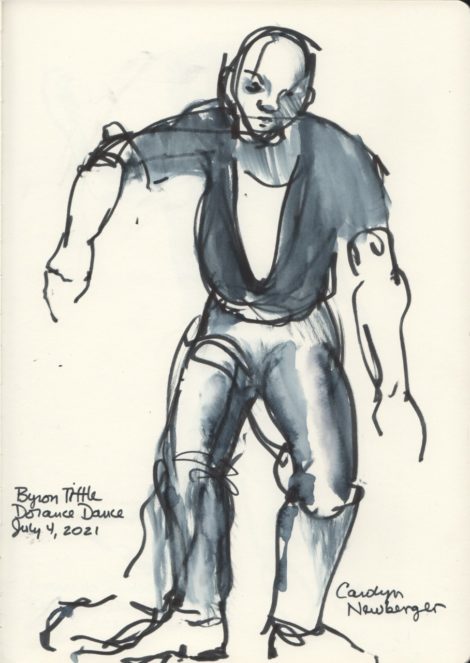 And then, supported by a shift of the dominant rhythm from 4/4 to a more jazzy 8/8, Michelle Dorrance raised the tonal palette.

Solo, she approached and retreated from the mic from the floor to the center of the stage, her toes emphasizing and decreasing the treble range, as the dancers slowly moved closer to the center, creating a wonderfully long sonic diminuendo. On a changing rhythmic basis, with elements at 3/4, 4/4 and 5/4, Dorrance returned to the line, while a singer repeated a simple word overflowing with melisms and passion: “I will give love. “ 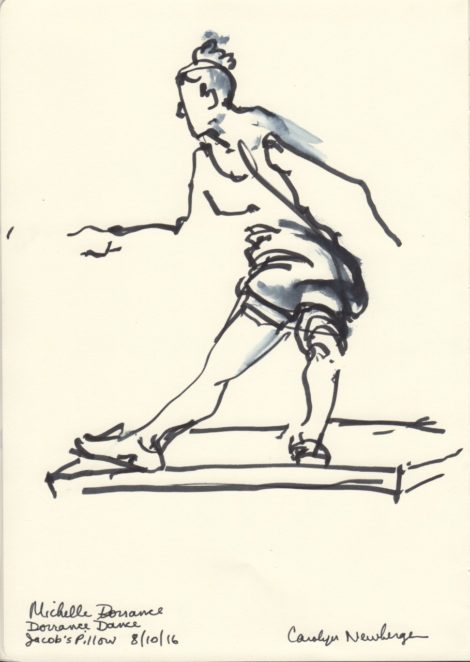 As the singing continued, a playful series of pas de deux took center stage as the company hugged them in a happy circle of rhythmic applause. 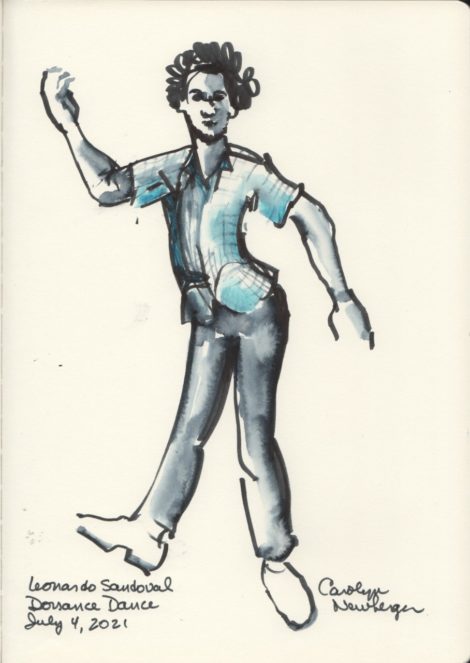 The effect was orchestral. Even Dorrance’s solo still felt at the service of the ensemble. The piece conveyed a sense of exhilaration, with each solo and group contributing greatly to the whole, being part of a vital and vibrant community, making a connection after the stress and pain of separation.

The second performance, “Praise”, is a collaboration between composer and trumpeter Keyon Harrold and dancer / choreographer Josette Wiggan-Freund. According to Wiggan-Freund in the program notes, “Praise” is about gratitude through liberation, the creation of “sacred space” and “transcendence”.

Standing in the center of the stage, Harrold opened “Praise” with an improvised trumpet hymn over a D minor chord, praying and sustained, as a male voice from above sang that he “… knows that I’m here for a reason – and don’t carry the burden. “The keyboards, bass, drums and second trumpet ensemble continued to support Harrold’s moving improvisation through a majestic chord progression, culminating in a bright and upbeat cadence in D major. (Around this time, and for the first time the sun rose.) A series of ascending riffs on a Alleluia theme, summoned the legacy of Dizzy Gillespie and his introduction to the American jazz scene of Afro-Cuban rhythms with his large group in the the 50’s. 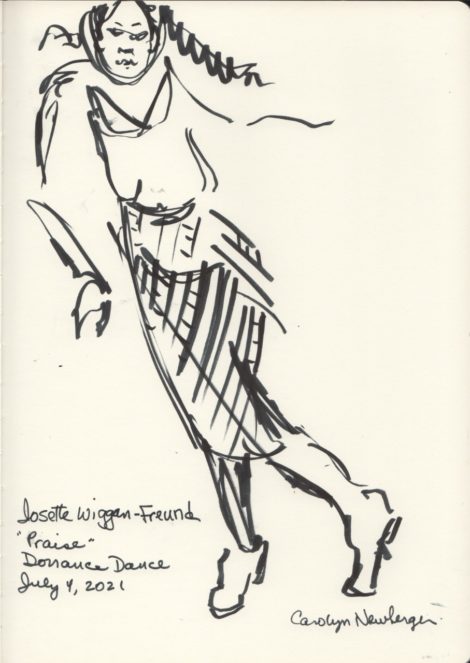 Josette Wiggan-Freund’s choreography, built around spoken poetic homilies, created a spiritual and reflective feeling in which speech and dance evoked themes of praise. First, an invisible child said without pretension, “I am so grateful for everything in my life and my family. Then a singer on the left of the stage sang, “Those who turn around don’t get you where you are.” “On the call” What is inevitable? The answer came, “If two hopes are meant to meet, the universe will always find a way to make a connection.” 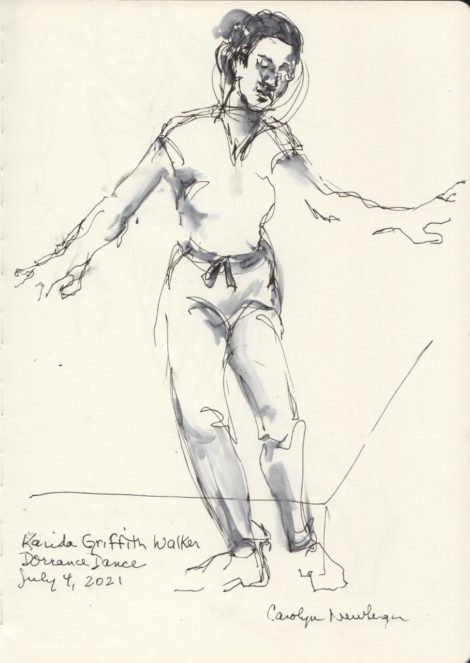 As the dance unfolded, each member of the company, alone or in pairs, communicated within their body and tapped their own vision of praise.

After a prolonged and expressive tap solo by the magnificent Josette Wiggans-Freund, in a striped skirt and flying braids, the group posed a formidable groove rock which carried the whole troupe on stage.

With daring jumps and drops, the couples conjured up lindy hop, and the scene exploded into a break dance star by Ephrat Asherie in her signature sneakers.

Spinning and whirling, Michelle Dorrance and “Bounce” Asherie catapulted the company and audience into a cloud of swinging polyrhythms, and cheers from – and a few dances among – the socially distant audience. Praise indeed.