Around this time two years ago, Jacob’s Pillow hosted a week-long celebration called “The Land We Dance on” in conjunction with the Native American community that has inhabited these lands for millennia. Local tribal dancers led the celebration, along with their own traditional dance groups, as well as wonderful dancers from the Cheyenne Sioux Nation in South Dakota. You can read our 2019 review here.

Jacob’s Pillow has engaged with the indigenous local people of the Berkshires since its founding, and the celebration of 2019 re-energized a lasting and deep relationship between the Pillow and the peoples and traditions of the Eastern Forest spectacle.

On Saturday, July 17, the promise of this lasting renewal came to life, with a performance of the dances of the Mashpee Wampanoag, Seneca, Cayuga and Nipmuc nations, joined by traditional Iroquois dancers.

The day, unsurprisingly, was another rainy one, so the hour-long performance was moved from outside to the Pearls Family Center, where the audience sat around the great hall on bleachers, chairs and rear seats on the floor. The atmosphere was festive, informal, the hall full of families with young children, older people and dance enthusiasts of all ages.

The dancers extended this sense of inclusion with performers of all generations, from the exuberance of young boys to the grave gravity of adolescents, to the dignity of elders. They also invited the audience to join in on several of the dances, which they did, including CEO and artistic director Pam Tatge and the staff at Pillow.

The program began with an invocation in Nipmuc and then in English, with words of gratitude for these lands “to which we are invited”, followed by a moving sample of traditional dances in an abridged form.

The local dancers began by talking about the gifts of nature and the importance of the daily functioning of their lives. 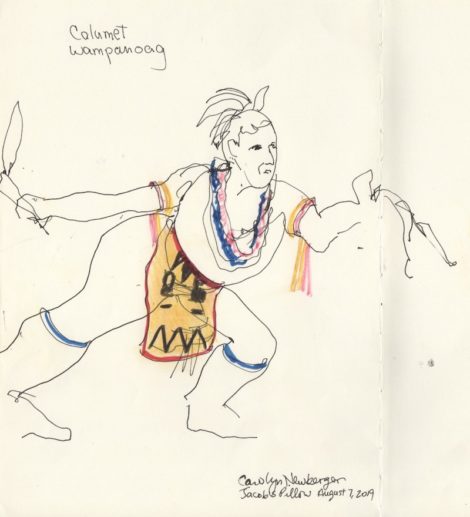 We recognized some of these dances through their wider interpretations in 2019, and in particular the Calumet dance, performed in four cardinal directions, which is a “Dance of giving thanks for the vessel that allows us to give thanks. Our sacred pipe (2019 program). Here are two drawings of the Danse Calumet, one from the 2019 show (above) and the other from last Saturday (below). 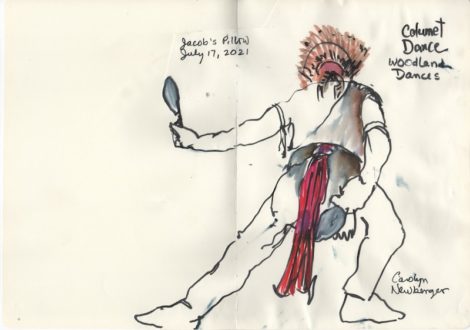 The stories depicted by the Eastern Woods Dances ranged from the deepest, like giving life (women) to life in hunting and war (men), lightly, like giving thanks for mosquitoes (” They remind us to keep moving forward. ”), All in a spirit of gratitude for life in its many forms. 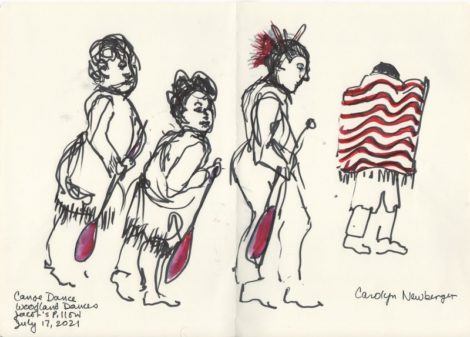 The canoe dance evokes the importance of the sea to the local tribes of the Eastern Woods. Although Jacob’s Pillow is inland, the Mi’kmaq territories covered 2,000 square miles across four states, and the sea is an important part of their life. 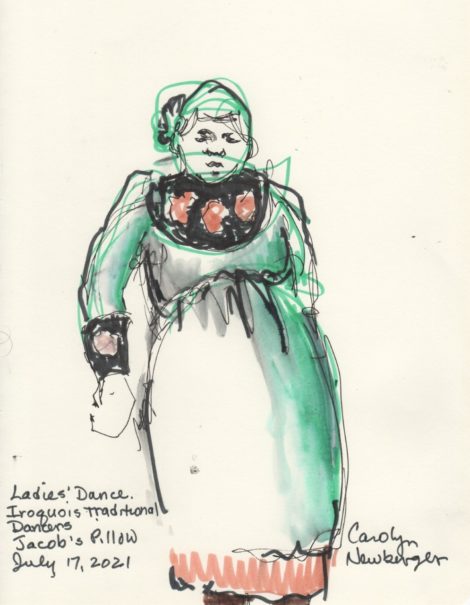 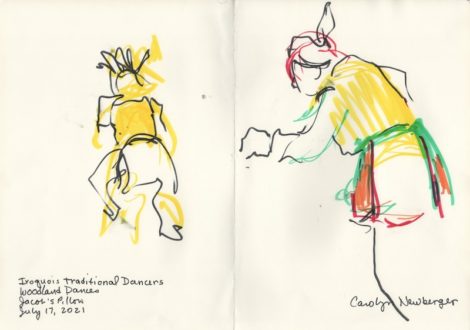 In the dances that followed, in addition to the older children, a young boy of about eight or nine electrified the dance floor. According to the host, “As soon as they learn to walk, they learn to dance.” 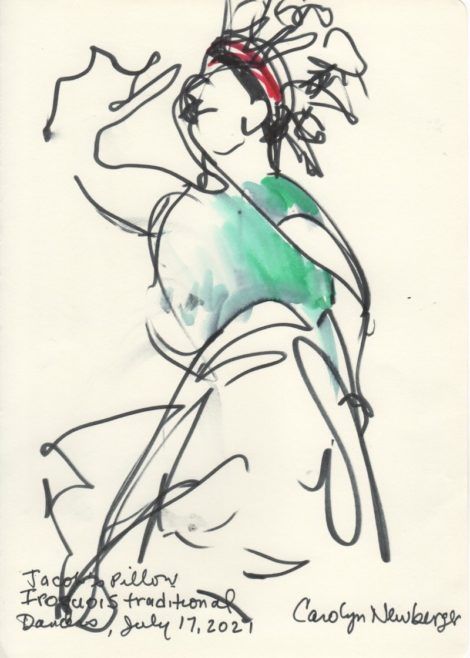 The “Wrong Dance” followed, in which a circle of men moved in the opposite direction to a small circle of women, and the program ended with “Earth Songs that Gave Gratitude”, in which the dancers came together in spirit and unity.

All in all, it was a most satisfying hour of traditional dance by the indigenous peoples of this region and continent. We look forward to the continuation of this artistic, historical and community bond with its mutual commitment to, as the narrator said, “Ceremony, resistance, survival and transmission.” “