Are you looking for a respite from the political chaos that surrounds us? Would you like to leave your problems behind? How about an escape to the energizing and uplifting dance world? Meet Ronald K. Brown / EVIDENCE at Kennedy Center until Saturday. A few strains of the glorious renditions, sung in gospel, tapping on the feet and clapping the hands of Meshell Ndegeocello will bring back that smile that has been missing for too long.

Maybe it’s the feel of a pop gig in an EVIDENCE performance, or the rich African American heritage it appeals to, or just the fervor and physicality of the dance. Whatever the reason, Brown fans are as loud as they are loyal, as heard in the rousing cheers of last night’s opening program, a trilogy of witty and uplifting dances.

… A spiritual experience. Beauty, power and strength come out of the stage to grab an audience.

Brown has been celebrated for his fusion of African dance form, rhythm and history with contemporary and urban dance styles. He has chosen talented technicians to enrich the repertoire program which includes accompanying pieces, “Grace” and “Mercy”, and a first glimpse of a new work, “The equality of night and day. Kudos to resident lighting designer Tsubasa Kamei, a genius at throwing green and gold lights when needed. 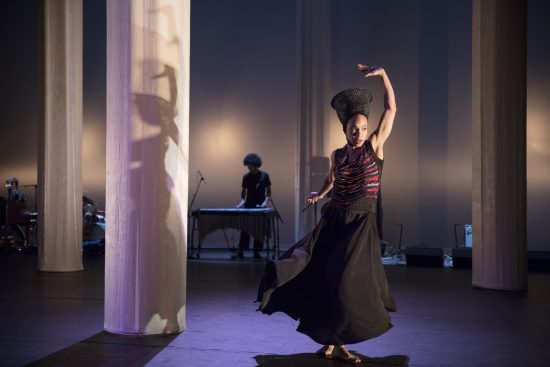 In “Mercy,” Brown found an ideal partner in singer, songwriter and bassist Meshell Ndegeocello. In their first collaboration, Brown’s choreography captures Ndegeocello’s moving plea for forgiveness to bestow mercy. Percussionist and singer Abe Rounds pleads for mercy as he moans, “mercy in swelling water”. Live music is always loved by dancers (and audiences), and this troupe was particularly vibrant, moving to the intricate rhythms of guitarist Chris Bruce and Band For Mercy organist Jake Sherman.

The curtain opened to a setting with musicians and golden streamers from ceiling to floor. Dressed in black, wearing a hat with African roots, a solo dancer enters the stage. Authentically costumed by Omotayo Wunmi Olaiya, Annique S. Roberts begins with a high kick, followed by a back fold, her hat almost touching the floor of the stage. His entrance sets the tone for this provocative piece.

Watching Ronald K. Brown / EVIDENCE perform is a spiritual experience. Beauty, power and strength come out of the stage to grab an audience. 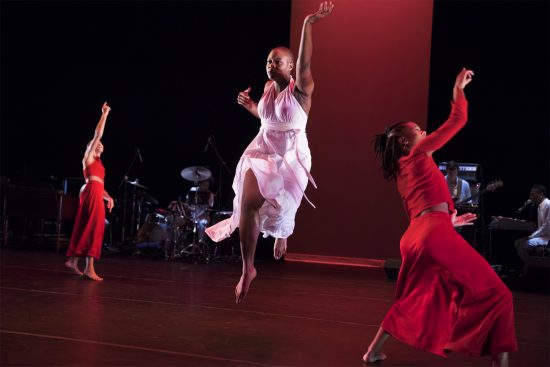 Closing the bookend dances, Brown asks for mercy and gives us grace. Originally choreographed for Alvin Ailey American Dance Theater in 1999, “Grace” is a journey from earth to heaven, to music by Ellington, Everett, Davis, Jr. and Kuti / Brown. Joyce Edwards, dressed in white and possibly depicting a Guardian Angel, hovers above the other nine dancers. She is powerful and forgiving at the same time.

Other writers might note a trace of Alvin Ailey’s creations as Brown is a longtime fan of Ailey’s work. and even fixed a number of works on the company. For myself, however, I recognized the touches of the late Eva Anderson, founding director of the Baltimore Dance Theater. Like Brown, his works were abstract, reflecting his love for jazz music, and some reminiscent of his early childhood in the segregated South. “Hambone,” a rhythmic formula used by African musicians and dancers, featured Anderson’s dancers doing everything from wild jazz moves to smooth, serene moves, much like dancers, especially Edwards and the other women. not identified in “Grace”.

Guest artists Daniel S. Harder and Hannah Alissa Richardson have joined the company for “Equality of Night and Day, First Look,” an ensemble piece that showcases both talented dancers and the desire to Brown to get his point across. Kennedy Center Artistic Director for Jazz Jason Moran created an original score and we listened to Angela Davis’ voice urging us to pay attention to racial injustice, xenophobia, exploitation and her Well-known “power over the people”. Dressed in blue robes that were thrown down and placed in a circle, the shirtless men began to writhe in agony, first twisting and spinning with one arm tied around their body, the other lifted up to the heavens. Touching, indeed, and deserving another look.

The Ronald K. Brown / EVIDENCE and Meshell Ndegeocello present a dance trio until October 23, 2021 at the John F. Kennedy Center for the Performing Arts, 2700 F St. NW, Washington, DC 20566. For more information on this 2021-22 program and dance series, visit here.

At the head of the next contemporary dance program in the series:

This new program presents the DC / Philadelphia premiere of critically acclaimed “Loaded Basses”; weaving four bass players and four tap dancers together for an exciting composition; the Bessie Prize-winning “Three to One” danced to contemporary artists Aphex Twin and Thom Yorke of Radiohead; and Dorrance’s famous “SOUNDspace”, celebrating what makes tap dancing unique – both the movement and the music. The program ends with a healthy dose of holiday cheer, featuring Ella Fitzgerald’s timeless holiday songbook, sung by Dorrance Dance resident singer Aaron Marcellus and danced by the whole company.

Please see the Kennedy Center website for more information on this program.