Wiradjuri man Daniel Riley made history as the first Indigenous director of a non-Indigenous Australian dance company. Long overdue, perhaps, but no less timely in this time of historic upheaval that demands an examination and dismantling of the status quo. It requires a vision that transcends barriers to mutual understanding and knowledge sharing, an arbiter who can bring together past and present to find a new future in a new Australia that builds on the 75,000 year old knowledge transported in the country, in the stories, songs and bodies of its traditional owners.

Two dancers, dressed in clothing the color of river rocks, lie curled up on a dark, blue-lit stage. The sound of flowing water gives way to a soundscape of prodigious rumbling, and as if awakened by a tremor deep within the earth, the rocks spring to life, unfolding, limbs twitching and shaking. as if they were pushed by an invisible external force.

A skein of blue thread is unrolled and pulled across the floor, the eternal flow of water marking the passage of time, and the remaining four dancers of the company join the others, sliding, rolling and undulating across the floor with the blue thread , as if riding the currents of the freshwater rivers that cross the ancestors of the woman of the Country of Barkindji, Adrianne Semmens. They merge in flux, slide over each other, then separate; signs of a disturbance in what has always been are marked by sudden changes of light from blue to gold and the contrast between gentle wave motions and sharp jerks of limbs.

A reminder that choreographer Semmens’ vision of these fresh waters is where she now resides – in the salt water country of Kaurna – comes with the melancholy figure of Zachary Lopez, crawling across the stage like William Blake’s Nebuchadnezzar, weeping salt trails from the white mound on his back. This is the first of three works that make up Outside inside, a review by Semmens of his 2021 work, Immerse.

There is a moment of breathing before an audiovisual projection of mulumna – On the inside illuminates a background of opaque corrugated plastic sheets. The screen’s industrial texturing adds a sense of edge and urgency to the moving images, with the foil performing the additional role of disguising the salt streak remaining on the stage floor from the previous segment, removing the need to sweep it away. . 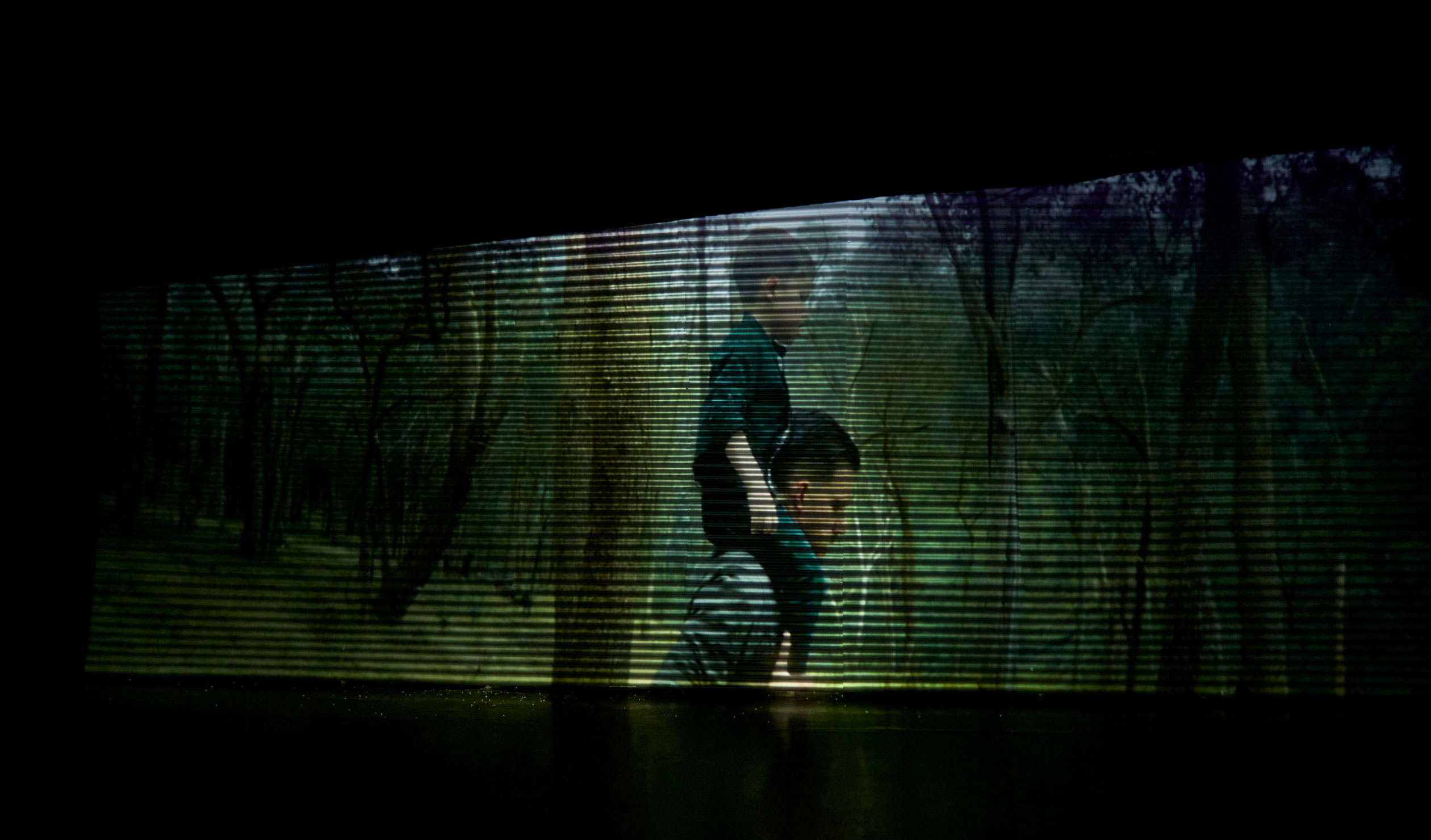 A still of mulunma – Inside the inside, featuring Daniel Riley and his young son. Photo: Sam Roberts

Riley’s room, mulumna, commissioned by RISING: Melbourne in 2021, alternates between Western and First Nations archival views. In the projection, Riley embodies the distress at the requisitioning of cultural objects as he moves through the dark, cramped hallways of a museum archive.

He runs as if trying to escape, then, looking for something – until he comes across a badhawal (boomerang chase). Object as portal, he leads him and his young son Archie back to the wide open spaces where Country and those who live with him are steeped in an ancient archive containing 75,000 years of knowledge. After a solemn exchange of knowledge from father to son, the badhawal is returned, carried with a new spirit, to the archives of a New Australia.

Images fade and are replaced by a band of harsh industrial lighting for the final piece in the triptych: Riley’s The thirdwhich aims to extend the concepts of mulumna.

Two dancers, dressed in loose shirts of red and white ocher, yellow clay, anthracite black and earthen trousers, stand, unstitched, as if waiting for a metro train in the belly of an industrial city. There is a sense of electrification and disarticulation in the movements of the dancers’ restless limbs, interspersed with moments of gentle beauty that ease the tension; both evoke movements made in Semmens’ piece earlier, closing the circle of three and offering a glimpse of hope in a process of constant change.

This is not Pollyanna’s view of what we face in a country that needs healing, a period of adjustment that will likely bring necessary disruption before a new way of being can be found. The dancers come together into one mellow, throbbing body before parting again, as if to warn that it will not be easy to unite various ways of being to find the solution, but in the final moments, as the lights go out, one of the steps of the dancers advances towards the front of the stage and stretches out a hand towards the public, as if to say: that’s it, the rest is up to you.

Your support will help us continue the important work of InReview in publishing free professional journalism that celebrates, questions and amplifies the arts and culture in South Australia.